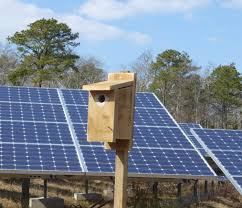 What is community solar?
Community Solar is an option for those who are interested in solar electricity but can’t have solar panels installed at their own house or apartment. Sometimes called a “solar garden” or “solar farm,” a community solar facility is a large, centralized solar power array. Electric utility customers in the same electricity “load zone” as the array are eligible to participate, whether they live in a house, condo, or apartment. This is a way to support solar energy while at the same time getting a savings on your utility bill.

How does it work?

Are there companies planning community solar in the Needham area?

In 2015, Boston start-up Yeloha began offering a way for individuals to share in the benefits of solar panels installed on someone else’s roof. Rather than developing a large solar array at a solar farm, the company planned on installing arrays at residences and small businesses and allowing others to share in the electricity produced.

February, 2017 update: The start up has closed and this message appears on their website: “Unfortunately, the resources required to sustain Yeloha and bring it to the next level were not available in this environment. We had to shut down Yeloha, but we remain confident that solar sharing will shape the future of energy. Our users and supporters can take pride as pioneers on that journey.”