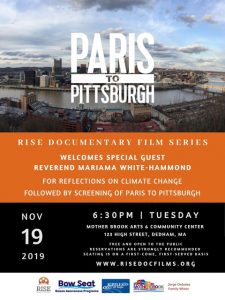 RISE Documentary films is putting on an exciting evening about Climate Change.   Mariama White- Hammond will speak before a film screening of Paris to Pittsburgh on Nov 19th in Dedham at 6:30 pm.

The 78-minute film documents “the impassioned efforts of individuals who are battling the most severe threats of climate change in their own backyards. Set against the national debate over the United States’ energy future-and the Trump administration’s explosive decision to exit the Paris Climate Agreement-the film captures what’s at stake for communities around the country and the inspiring ways Americans are responding.”

You can watch the trailer here.

The program is FREE and there is a community reception beforehand.