Where does all of that cafeteria lunch trash go? That was the question the Radioactive Hamburgers, a team of fifth grade students at Hillside Elementary School, asked when they began work on their FIRST Lego League (FLL) project last fall and were tasked with designing a project that solved any problem related to trash and/or recycling. Their answer would not only result in their winning an innovation award at the December 5th Worcester Qualifier tournament, but it also jump-started an initiative to better address the issue of mealtime trash at the Hillside Elementary 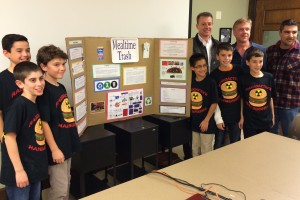 For their project, Hillside students Zachary Brown, Noah Dooley, Adam Kuechler, Daniel King, Dilin Meloni, and Omri Sde-Or focused their attention on understanding what happens with the lunchtime food waste generated at Hillside and how to better dispose of it. The boys began by meeting with Greg Smith, Needham’s Superintendent of Solid Waste and Recycling Operations. Mr. Smith explained the town’s composting program at the Recycling and Transfer Station (RTS), where yard waste (i.e., brown matter) and organic waste (i.e., green matter) are combined and recycled into rich fertile compost. In learning that the RTS is interested in working with local organizations to obtain more green matter, the boys developed  an innovative system that would channel to the RTS the large volume of food waste produced at their elementary school.

As part of their initial research efforts, the FLL team enlisted the support of Michael Kascak, Hillside’s principal. They were also able to interview lunchroom staff and the school custodian about existing processes to deal with food waste and the suspected volume of food waste produced by the school community. The results of their early research were presented at the FLL competition and, subsequently, to the Board of Selectmen for the Town of Needham. Although the FLL competition only required the boys to propose a solution, the team continues to work on implementing their original proposal. 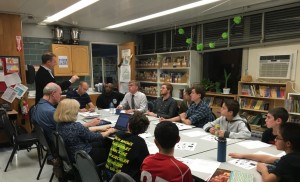 Working in collaboration with Mr. Kascak and the school custodian, the boys conducted pilot studies during March and early April 2016 to address two key questions: 1) what is the volume of food waste being produced by the school? and, 2) can you get elementary school children to sort their waste into discretely labeled bins to ensure that food waste is separated? To conduct these studies, trash bins were labeled according to 4 different waste types: 1) foam trays; 2) milk cartons; 3) food waste; and, 4) other trash. The FLL team spoke to all students about the importance of recycling food waste and reducing overall trash. They also talked with them about how to separate food waste. They then piloted the use of the trash bins by grade level during various lunch periods across the span of several weeks. Through these pilot tests, they found that elementary students were able to successfully separate their waste. They also found that, on average, each grade level at Hillside produces about 10-20 pounds of food waste per lunch period each school day.

Additionally, during the spring, the students met with town and school officials, as well as parents and a few Needham High School students, to put together a Working Group to examine next steps and brainstorm about how the food waste would be transported to the Needham RTS. Subsequently, the Working Group has received news that a solution is being worked out. The Town of Natick, which has been negotiating to bring food waste from their town to the Needham RTS, has agreed to pick up Hillside’s food waste on the way to the RTS. Details are still be worked out, and the Hillside Food Waste Working Group is excited to see the potential for this project to move forward.

As the next stages of this project move forward, the FLL students and the associated working group aim to determine how this project could grow in scale to expand to the other Needham schools. They are already excited to see that NHS students are interested in tackling a similar project at the high school and look forward to sharing what they learn with the older students and potentially collaborating to ensure that this initiative moves town-wide. 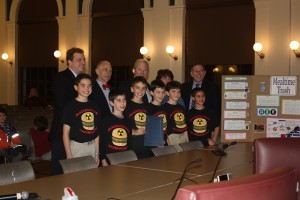