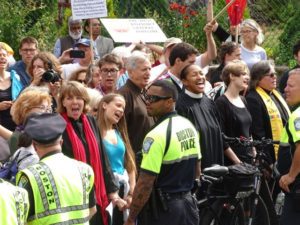 The numbers are impressive — including the many protests over the summer, over 150 people have willingly been arrested in nonviolent actions to protest a natural gas pipeline extension in West Roxbury. The protests at the pipeline work sites are ongoing. ResistThePipeline.org continues its peaceful civil disobedience trainings at the Theodore Parker Church in West Roxbury, with support from the MA Interfaith Coalition for Climate Action and other groups.

Why are people, even some in their eighties, willing to be handcuffed and loaded into police wagons? Why does a national figure such as Karenna Gore join a local protest and write a Boston Globe column  explaining her actions?

The West Roxbury Lateral Pipeline, part of a larger pipeline expansion project by Spectra Energy,  is a 5-mile pipeline extension that runs through Dedham and West Roxbury, carrying fracked gas from Pennsylvania. This is a high pressure pipeline — 750 pounds per square inch, in comparison to the 22-60 pounds per square pressure in the distribution lines delivering local gas. It is planned to run through densely populated neighborhoods, with a metering station right across from an active quarry where dynamite blasting shakes nearby houses.

This local protest, born of health and safety concerns, has become part of a much larger movement to protest new fossil fuel infrastructure. While the gas industry promotes natural gas as a cleaner-burning “bridge fuel” replacing coal and oil, environmentalists see the dangers of natural gas, which consists mostly of methane, a greenhouse gas many times more potent than carbon dioxide. Rather than spending billions on costly gas pipelines, they demand  increased investment and research in renewable energy,  repair of gas leaks, methods to reduce demand during peak periods, and promotion of energy efficiency and conservation.

Several recent studies have addressed the issues surrounding gas infrastructure. A November 2015 study commissioned by the Massachusetts Attorney General’s office found that increased gas capacity is not needed. (Since the permits had already been granted, the study assumed that the West Roxbury Lateral would be built.) According to AG Maura Healey, “This study demonstrates that we do not need increased gas capacity to meet electric reliability needs, and that electric ratepayers shouldn’t foot the bill for additional pipelines. This study demonstrates that a much more cost-effective solution is to embrace energy efficiency and demand response programs that protect ratepayers and significantly reduce greenhouse gas emissions.” Around the same time, a Harvard study estimated the $90,000 worth of natural gas is leaking each year from the Boston area.

In other developments, last April, Kinder Morgan cancelled plans for a controversial 188-mile gas pipeline through New England. And finally, environmentalists are celebrating the Massachusetts Supreme Judicial Court decision striking down a plan to make electricity customers bear the cost for construction of new gas pipelines.

Pipeline Protests Heat Up Over the Summer