Get ready for April! Our voices are needed now more than ever to rally for climate action and for science.

On Earth Day, April 22, the Boston Rally for Science will serve as a sister march for the March for Science in Washington, DC.  In Boston, a stage will be set up on Boston Common with kid-focused activities from 1:00-2:00 p.m. and the main speakers and rally will take place from 2:00 to 4:00 p.m. Register here for the Boston march.

According to the organizers: “This Rally for Science celebrates the discovery, understanding, and sharing of scientific knowledge as crucial to the success, health, and safety of the human race. We join together to champion not only science itself, but also publicly funded and publicly communicated scientific knowledge as a pillar of human freedom and prosperity. We unite as a diverse and nonpartisan group to celebrate Boston as a space for scientists and scientific research and to promote science education, literacy, funding, and communication.” 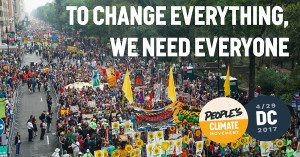 350Mass is organizing buses for the April 29 People’s Climate March in Washington DC, where people from all over the country will rally for climate, jobs, and justice.

Plans are now in place for a Boston People’s Climate Mobilization event in support of the April 29 People’s Climate March in Washington D.C.  In Boston, on Saturday, April 29, activities will start with a rally at noon on Boston Common calling for Jobs, Justice and Real Climate Solutions. Following the rally, from 1 p.m. – 3:30 pm., participants can browse Action Tables set up on Boston Common and attend Teach-ins on the connections between the climate fight and other struggles for justice at indoor spaces around the Common. (Learn more here.) The sign-up link gives a full listing of teach-ins.