Over the years, but particularly in the past year, I have met a lot of people who are making changes in their lives to be a better neighbor to planet Earth.  They are pretty ordinary people doing extraordinary things.  They are inspiring, and we all need inspiration, so, I’d like to shine a spotlight some of them.  I’ll call these “Neighbor Spotlights”.  The first one is about Donna & Bill, and it’s how one thing leads to another.

A year ago, Donna & Bill had a free home energy assessment and she got some bad news. Now, Donna is a woman who gets things done. She raised two boys in the Needham schools with her husband, Bill, is an active member of the Community Concerns and Green Committee at Christ Episcopal Church and one of Green Needham’s most energetic affiliates. She cares deeply about the environment and worries about our future, but also acts. In 2013, Donna and Bill had 22 solar PV panels installed to cover at least 60 percent of their electricity needs. Since 2008, they have been driving Priuses. They also built an Energy Star 5-Plus certified cottage up in New Hampshire. So they could have been resting on their eco-laurels, instead of getting a home energy assessment. 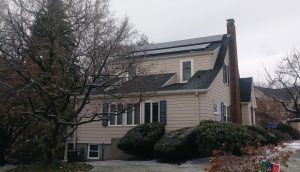 The news they received from the energy assessment was that they could not get the insulation upgrade they had hoped for because the 30-plus year old boiler in the basement had a small carbon monoxide leak. Without the insulation, the carbon monoxide seeped to the outside and did not cause a problem, but with buttoning up their house, it could potentially build up indoors. To upgrade the insulation, they would first need to replace the boiler. At this point, many home-owners might have given up. Instead, Donna & Bill pursued the new boiler and the MassSave incentive to replace it. But the new boiler, it turns out, led to needing to replace the hot water tank. And this led Donna to investigate a solar hot water tank.  Now, this cost $9500 up front, but, with the MassCEC rebate, 30% tax credit, and 15% Mass tax credit, her out-of-pocket cost was just over $2000 — same price as a regular hot water tank.  So they went with solar hot water.

In June, Donna and Bill got their solar hot water system, which will cover 70 percent of their hot water needs. In the same month, the new 95% efficiency boiler replaced the old one which was hobbling along at 70%. And, in the end, the insulation upgrade happened, which will shave even more off their fossil fuel energy use.

Do you think Donna & Bill will stop there?  Nope. One things leads to another and in January 2018 they will have twelve more PV panels installed to fuel their future electric cars! On to shopping for those EVs!

Babette Wils is a Needham resident and active Green Needham volunteer. Babette is stepping down from a career in international education consulting and stepping into a career as a food forest farmer. This article is adapted from a post on Babette’s BigFoot Gardens blog.

Neighbor Spotlight: One Thing Leads to Another