As many communities work to implement environmentally friendly programs, the Needham High students in the Environmental Club are joining in with their own initiatives. 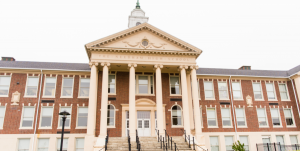 Recently the club’s faculty advisor Hans Batra, and the student co-presidents Conner Jahn and Riley Roefaro, updated Green Needham on the progress of their latest initiatives.

After visiting Hillside Elementary School last year and talking with the students about their composting program, the Environmental Club decided to bring a similar one to the high school.

“Once we saw that first graders were composting, we thought why not try it,” said Jahn. “The goal of the club is to better the environment, and we thought composting was one of the best things we can do.”

Improving the environmental footprint of the cafeteria has been a topic of interest to students at the high school for several years. The club’s interest dovetailed with work Green Needham was doing with Recycling and Transfer Station Superintendent Greg Smith, and with CERO, a Boston-based worker-owned cooperative that provides food-waste composting services, to expand food waste composting in Needham. Green Needham brought CERO, Greg Smith, and NPS Food Service Director Ruth Griffin, to a meeting of the environmental club.

Having made steady progress within the school, the club is working to leverage these new connections. CERO will supply the high school with compostable bags and transport them to the Needham Recycling and Transfer station as part of the 30 tons per week CERO is contracted to deliver to the RTS.

With CERO on board, the next step lies in coordinating with the cafeteria staff and custodians, before bringing the program to the NHS community.

“There has to be buy-in for everybody,” said Batra. “It’s a big process.”

According to Batra, the largest challenge will lie in educating the students.

“That’s going to be the hardest thing, is how do you get the students who have never done this before to not dump it all in the waste basket,” said Batra.

In an effort to determine best practices, members of the club have met with other schools and businesses that have successful programs. These include Andover High School, Olin College and even a local Chipotle. So far the best ideas for educating diners include using color-coded labels and pictures over the various bins to show what goes where, according to Jahn.

He feels optimistic that once a composting culture is created at the high school and students understand what it is, the rest will fall into place.

As a senior, Jahn is eager to see the project through.

“This has been the most focused project over the past two years. I am really proud of what we’re doing because kids always think about how they’ll leave a mark on their school, and this will be my mark,” said Jahn.

He hopes to have everything set up by the end of this school year so the program can launch in the fall of the 2018-2019 school year.

While Jahn and other club members tackle composting, Roefaro is working with another team from the club to implement a town-wide plastic bag ban. Switching to paper or reusable plastic bags in Needham will help reduce waste and foster a stronger environmentally friendly culture in town.

“We have a lot of litter and plastic everywhere,” said Roefaro. “We figured why not Needham.”

In partnership with Green Needham, the club dove into the project with a survey of local businesses to see if they would be open to a plastic bag ban. According to Roefaro, most stores have been open to it.

“The sense is there wasn’t any huge opposition to it; the major players just wanted to be informed,” said Batra.

What opposition does exist seems to come from the concern that paper bags will be more expensive, and simply the idea of change itself, according to Roefaro. The club is working to brainstorm solutions to these concerns, which include charging a few cents more for plastic bags.

As the push for  a plastic bag ban moves forward, the Board of Selectmen is supporting a proposal to encourage larger stores to voluntarily eliminate their use of plastic bags for checkout, rather than a town wide ban which would require Town Meeting approval. However, Green Needham favors the town wide ban as it is easier to implement and consistent with measures that 60 other towns in Massachusetts have taken to reduce the use of single-use plastic bags.

Though the composting program and plastic bag ban are taking up much of the club’s time, the students have still found time to work on a few other projects as well.

Three years ago the club started selling reusable water bottles in order to encourage students to stop using single-use plastic water bottles. The project has been successful and is now winding down as the club is trying to sell its last remaining water bottles.

“I see at least four a day when I walk around the school,” Jahn said of the club’s reusable bottles.

Installing more water bottle refill stations will be key to maintaining the success of the project, according to Jahn.

In addition, Jahn and a few students are also working to find alternatives to the plastic gloves used in health class. As part of the school’s curriculum, students learn how to properly use plastic gloves. However, students only spend one day learning how to do this and at the end of the class all the gloves are thrown out and never used again.

“I thought ‘wow that is a huge waste of plastic,’” said Jahn.

Jahn has already approached a few health teachers who agree that it is a waste and he is exploring alternatives like using compostable gloves or gloves that can be washed and reused.

There is no set plan yet, but the club is exploring options.