I met Stephen at a Green Needham planning meeting for a town event coming up next fall (keep an eye out for further notice).  He impressed me with his upbeat, calm presence, and with how he packaged our ideas in a way that nudged our meeting from somewhat disorganized searching to excited purposefulness.  In the course of the evening, I learned that Stephen gives climate talks around the area, that he was trained by Al Gore as part of the Climate Reality Project, and that it all started with a new lawn mower. 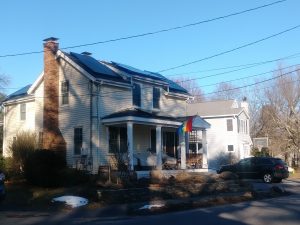 This new lawn mower, which Stephen bought a few years ago, was battery-powered and replaced a gas-powered one.  On the summer day when he first took it out, Stephen had already noticed its lightness.  Turning it on with a simple press of the button, he felt pleasantly relieved not needing to prime the gas, set the choke, and yank the wire.  “Never again,” he thought, smiling.   Pushed easily over the long grass, the machine was powerful, quiet; his two boys stayed around — wanting a turn.  Wow, that’s cool, they used to run inside from the noise and the smell.  They even asked if they could use the mower. Stephen had an epiphany: maybe going green was easy and nice.  Based on this experience, Stephen and Heidi became “creeping environmentalists” (Stephen’s term).  They started making incremental green choices, each time saving money and effort, so the was next step easier – right up to the tipping point into activism.

There was the way composting and recycling — initially to save on the costs of the pay-as-you-throw bags — became a game.  “Wow, no trash, only recycling, to the dump this week!”  They replaced portions of their lawn with drought-resistant perennials. There was the time a MassSave contractor came in for a home energy assessment and left a free carton of LED lights saying, you’ll never have to buy another bulb as long as you live in this house, and will save 85% on lighting costs.  There were the 16 solar PV cells they bought with a Mass Energy loan, where the costs of repaying the loan were less than what they used to pay for the electricity.  Then there was the Bolt, for which Heidi was the key motivator.  Getting into the Bolt for the first time was the lawn mower moment all over again: this car is faster, quieter, and not smelly!  Plus, Stephen realized, we’ll never have to change broken spark-plugs, mufflers, drive belts, or any of that stuff because the car does not have them.

All of these changes made life easier, cheaper, and yes, greener.   But a real turning point occurred last year, when Stephen went to a Climate Reality Project talk.  Here  Stephen learned that climate change is not about saving polar bears or a few coastlines.  The inter-connected system of climate change, the speaker showed, threatens everything we value – prosperity, peace, our civilization as we know it, within the lifetimes of today’s children.  But, he continued, we are already using existing technology to turn things around and  we need to act to make it happen faster.   Both Stephen and Heidi realized they can help to make things happen faster at the local and state level.  Stephen was trained by Al Gore in Pittsburgh for three days last summer and now gives talks where he can – in schools, houses of worship, and organizations — and has become active in Green Needham.  Heidi has become engaged in local political groups.  Doing so gives them hope.  Do they have the time?  They got rid of things that are less important, like a few TV shows.  “I know I will be doing this the rest of my life,” Stephen says.   That will be a gift to all of us!

Babette Wils is a Needham resident and active Green Needham volunteer. Babette is stepping down from a career in international education consulting and stepping into a career as a food forest farmer. This article is adapted from a post on Babette’s BigFoot Gardens blog.