The very roof over our heads is reaching new heights thanks to a team of fifth graders at Hillside Elementary School. This past autumn, teams across the world participated in FIRST LEGO League (FLL) competitions where they were asked to identify challenges in our water cycle and propose innovative solutions to solve them. The Hillsiders drew inspiration from the rain water collecting roofs from the island of Bermuda, but they wondered why a tourist destination famous for sunny beaches didn’t have solar roofs as well? 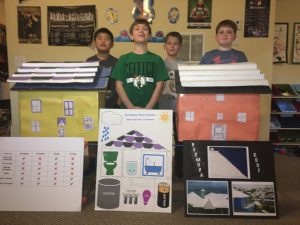 Bermuda is an interesting case. The island has no natural source of fresh water other than its 55 inches of yearly rainfall. So the local building codes require all roofs to capture and store rainwater in cisterns. Local craftsmen have mastered the art of building stepped roofs from the island’s abundant limestone supply. The steps help channel the rainwater into the integrated gutters, preventing spillover. The limestone is whitewashed, providing a unique and charming character to the local architecture which appeals to tourists. Additionally the whitewash helps enhance the sun’s natural ultraviolet cleansing abilities.

The team is composed of Sam Doff, Josh Lee, Gabe Pressman and Dylan Schaffstein and they style themselves the Non-Couch Potatoes. Their interest in water conservation led them to study Bermuda. Needham’s yearly rainfall falls only a bit short of Bermuda’s so it seemed feasible to the team that the island’s solution could work here as well. While the average Needham resident uses more water than the average Bermudian, a rainwater collection system in Needham would always have the town water as a fresh water backup.

Limestone is not a practical building material in Needham so the team began observing the types of roofing material common around town. They evaluated those materials based on several criteria:

The Non-Couch Potatoes quickly realized that the solar panels they saw ever more frequently on Needham roof tops also provided an added benefit: a renewable source of electricity. So they added energy harvesting as a criteria.

Solar panels checked all the boxes except for one. The panels are large, rigid glass surfaces that don’t lend themselves to steps. Not to be discouraged, the team researched other solar configurations and learned of a new class of solar technology called solar tiles. The solar tiles are sized more like traditional slate roofing tiles which were once common in New England. This newcomer to the roofing material world could certainly be made into steps. Finally the team had a solution that checked all the boxes.

The Non-Couch Potatoes crafted a paper design of a house utilizing their water collecting solar roof – the Super Roof. Storage systems were added for both water and electricity in the form of a cistern and battery pack respectively. The captured water is pushed through a series of filters to make it drinkable.

Replacing a roof is an expensive proposition. And a cistern in New England would need to go underground to prevent the collected water from freezing. So the team concluded that their water collecting solar roof would be best suited for new construction, although retrofitting would certainly be possible for those motivated to do so.

In Bermuda turning rainwater into potable water has been the norm for 400 years. They have builders, equipment providers and inspectors well versed in the process. But towns in New England would need to build that expertise and put proper regulations in place. The team felt that might be the bigger hurdle for early adopters.

Solar roofs are destined to become the norm. The Non-Couch Potatoes’ bright idea to to use that same roof to catch rainwater when the skies are not so bright utilizes all that Mother Nature has to offer. The Super Roof is the perfect force multiplier for a green future.

Thanks to Mike Schaffstein, parent coach for the Hillside Non-Couch Potatoes, for sharing the information about their project.