Imagine a house that uses the steady warmth of the earth – approximately 60 degrees — to heat in the winter and cool in the summer.  Geothermal systems in New England do just that.   Also known as Ground Source Heat Pumps, geothermal systems draw in 60 degree coolant from pipes deep in the earth (about 400 feet deep is not uncommon), use reverse-refrigeration to heat it up to 100 or so degrees, and then distribute the warmth through the home.  In Summer, the system uses the 60 degree coolant for air conditioning.   I visited a geothermal house last Winter. 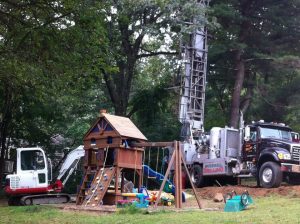 When I entered Bob’s hallway, I immediately noticed how comfortable it is.  Bob explained that his geothermal system gives off a more consistent and gentle heat, and because there is no fuel burning, the air in their house is cleaner.  Nice.

In 2009, Bob needed to replace the old oil furnace.  He was also thinking of upgrading their air-conditioning to something better than the two window-units in the bedrooms.  And, the 30 percent tax credit for renewable energy installations had just come out under the Obama administration.   Somebody in Bob’s office mentioned something about geothermal.  Really?  That works here in New England without geysers or hot springs?   Yes, it does – the geothermal takes 50-degree heat energy from the ground and uses that to generate temperatures of up to 100 degrees to distribute through the house.

So, Bob got some quotes and he figured that, with the tax credit, the pay-back period for the installation was only 6 or 7 years.   Another perk of the geothermal was that in the summers, it would convert into very affordable central air-conditioning.   A giant drilling machine came in to make two 300-foot deep wells for the system (it produced a big-ish pile of rocks) and new geothermal unit was hooked up to the existing air-duct work.  Finally, having changed the house over to efficient geothermal heating and cooling, Bob signed up with an electricity provider that generates almost all of its electricity from renewable sources.

As a parting gift, Bob provided me with some information about current programs to support geothermal in Massachusetts.  In addition to the 30 percent tax credit (which still exists), and a 0% heat loan, Massachusetts is offering generous rebates up to $17,500 for geothermal.  What does this mean?  If you need to replace your furnace and could use cleaner air as well as central air-conditioning in your house, geothermal can be affordable.   Maybe a few more among us don’t have to wait 30 years for that home of the future…

This “Neighbor Spotlight” is one of a series about ordinary people in Needham doing extraordinary things to be a better neighbor to planet Earth.  Please be inspired!

Babette Wils is a Needham resident and active Green Needham volunteer. Babette is stepping down from a career in international education consulting and stepping into a career as a food forest farmer. Read more from Babette at her BigFoot Gardens blog.