You may have noticed some unusual yard signs and flyers displayed in Needham for a week in mid-May — the ones that alerted you to sites of potential gas leaks. Did you wonder how they got there? And why?

I had the great pleasure of meeting with a passionate, informed, and eloquent mom,  Liz Gregg, who spoke about the gas leak alert carried out by the Mothers Out Front Needham chapter, which started in our area in January. 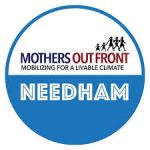 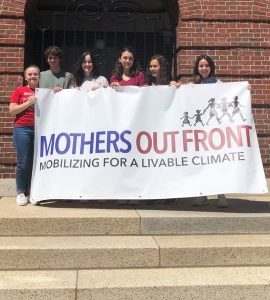 On Mother’s Day weekend in May, Liz joined with 25 others who had gathered with maps, Mothers Out Front flyers, and yard signs to mark the sites of 71 of the 133 documented, unrepaired gas leaks in Needham. Selectperson Marianne Cooley was kind enough to come out and speak at this kick-off event.

Many of us heat our homes or cook with natural gas, which is carried in through pipes. The Boston area has one of the oldest pipeline infrastructures in the nation, some over 100 years old. At joints and through cracks, the pipes have the potential to leak methane, a potent greenhouse gas more destructive to the atmosphere than CO2.  The gas can be detected in a variety of ways: an identifiable scent, lawns that won’t thrive, trees that fail to grow.

The cost of gas wasted through leaks is passed on to consumers, which can be significant.  But we all pay in other ways as well, given that the problems of gas leaks include the following:

Liz got involved after she read a study about the predicted state of our climate in the year 2040. “I couldn’t sleep” she said, and vowed then to do what she could to avoid those dire predictions. “I drive a hybrid, I have solar panels on my house,” she said, “but it isn’t enough.” She had to get more actively involved. “I have 19 kids I worry about,” she said. “I have 2 of my own and teach 17 kindergarteners. They’re all my kids.”

Liz said that Mothers Out Front is “not political. It’s just moms who would like to be effective and take immediate action.”

In Needham, Eversource is the utility that supplies the gas, maintains the lines, measures the gas leaks, and fixes a pipe when a dangerous leak is detected. Mothers Out Front has a petition for concerned citizens to sign in support of Eversource, bolstering their efforts to get the pipes fixed. In this endeavor, Eversource has been on board every step of the way, and has a solid process for measuring leaks using the Leak Extent method.

“Eversource has been very responsive,” Liz noted. “We feel lucky that Eversource is our provider and is willing to help us with these leaks.” She urged concerned citizens to sign the petition and not overwhelm Eversource with calls–Eversource will prioritize the repair of the leaks by measuring the leaks and then fixing the most dangerous ones first. Once measured correctly, repair requires digging up the pipe and replacing it. The Needham Mothers Out Front group plans to monitor the utility’s progress and will report back to the community in 6 months.

What can you do?