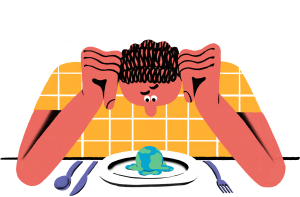 Are you increasingly concerned about climate change and feeling rather helpless? Do you feel like your actions won’t really make a difference? Ironically, the best way to snap out of the climate action blues is to actually take some action. Doing something will make you feel good inside, but even better, it will make a difference outside as well.

According to Project Drawdown, individual actions are enormously important in the fight to stabilize the climate. To write the book, Drawdown, 200 research scientists from various fields looked at options currently available to fight climate change and ranked them by impact. Out of the ranked list of 80 actions, two of the top five most impactful actions are individual actions. These two actions don’t require a large financial investment, and you can start making a difference as soon as your next meal by reducing food waste and tweaking what you put on your plate.

As it turns out, the world’s food system is responsible for about ¼ of the planet-warming gases that are generated each year!

So, what we choose to eat every day really does matter. According to a World Resources Institute analysis reported in The New York Times, if the average American replaced a third of the beef he or she eats with pork, poultry or legumes, his or her food-related emissions would fall by around 13 percent.

The recent IPCC Special Report on land use as well as the EAT Lancet Commission Summary Report emphasize how important individual engagement is. These reports recommend that Americans reduce meat consumption (particularly red meat) and food waste by 50% to meet various climate goals and to be able to provide a healthy diet to 10 billion people by the year 2050.

So, don’t be discouraged by thoughts that your efforts don’t make a difference. They do, and in more ways than one. Because when you reduce the amount of red (and processed) meat you consume, you will improve your health and reduce your chance of getting heart disease and various types of cancer. And when you share the changes you’ve made with your sphere of influence, you just might inspire others to make changes as well… and so on, and so on.

If you are interested in learning more on the relationship between food and climate, and how to shop, cook and eat in a warming world, go to this link:

What is One Person To Do?