In the nine years since, many Needham homeowners have benefited from Mass Save programs. We hope many more will, because these home energy savings programs were a good idea then, and an even better idea now.

What better way to make that point than to allow a couple of our Needham neighbors who have taken advantage of the program not once, but twice, tell their stories?

(Yes, you can do that, if it’s been more than three years since your last assessment.)

We’re now collaborating with HomeWorks Energy, a Mass Save partner, to connect residents to the program. Homeworks brought Caroline and Tom to our attention. Here’s what they had to say.

Carolyn Yates, who lives on Manning Street, has had two energy assessments since moving into her 1909 house. 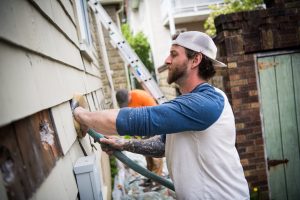 “There clearly was no insulation when we moved in. It was always cold,” Yates said.

She first learned about the Mass Save program through a direct mail piece that showed up at the house. She picked it up and thought, “why not? It’s free.” Yates had the first assessment a couple of years ago, where the home energy assessor changed out “a lot” of lights from incandescent to LEDs.

“That was huge,” she said about having the no cost LED lights installed. “We have this kitchen island and the bulbs above it were burning so hot … so it was really good to change those out.”

Yates said the first time around the company recommended insulation work, but for whatever reason missed some key areas. Yates had another energy assessment completed in February of this year. HomeWorks Energy recommended more insulation work be installed in the attic and knee walls, which double as closets.

Yates said she would “absolutely” recommend an energy assessment to her neighbors.

“For one, it’s free,” she said. “And certainly everyone wants climate control in their home.”

Tom Kaminsky’s Rivard Road house was built in the 1970’s. He too has been through the program twice.

Tom told us that an energy assessor came through his house a few years ago, changed out all of the old light bulbs to LEDs. The specialist who assessed his house also recommended insulation work, but Tom didn’t go through with it at the time.

Early this year, Kaminsky replaced his boiler and during the process he signed up for another no cost energy assessment. Again, insulation work was recommended, but the boiler replacement was so expensive that he didn’t go through with the work.

Kaminsky heard through friends that the insulation incentive had changed.

“I called back and that was, in fact, the truth,” Kaminsky said about the incentive change. “So we went ahead with the work.”

Kaminsky said the although house was built sometime in the 1970s, they’ve done a lot of work on it since then. Before the insulation was installed he noticed that it was cold in the bedrooms and a den that pushes out away from the house.

In late July, an insulation team from HomeWorks Energy came to the house and spent three days working in the attic. They did a lot of work – pulling up flooring, spraying blown-in cellulose across the attic floor, and installing a thermal dome around his pull-down staircase.

“It wound up costing us $36,” Kaminsky said of all of the work that was done in the attic.

Though he hasn’t yet noticed a big difference in his home’s temperature in the warm weather, he does anticipate he will when winter arrives.

HomeWorks will donate to support the work of the Green Needham Collaborative for every home energy assessment that’s performed.

Nine years later, a good idea is even better. Let these Needham neighbors tell you why