How many of you know that when you visit Needham’s Recycling and Transfer Station (RTS), you pass near an important environmental success story hiding in plain sight  — one that produces a remarkable amount of renewable energy and saves the Town an impressive amount of money every year? Take a look at the hill opposite the yard waste area. 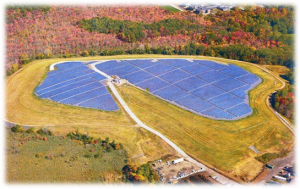 There, on top of the capped landfill, you will see the huge 12-acre solar array pictured in the photo.  With no moving parts and using only the power of the sun, the array produces millions of kilowatt hours of clean electricity each year, reducing the Town’s carbon footprint.

Coming online in July 2016, the solar array is the product of a community effort initiated by Green Needham and involving the Town’s elected leadership & staff, Town Meeting, Green Needham and an appointed citizens’ advisory committee.  The 3.7 megawatt solar array contains 11,780 solar modules rated at 305 watts per module. The array faces south, and is tilted at a 25% angle to produce the maximum energy possible.

The project produces between 3 and 4 million kilowatt hours (kWh) of clean, renewable electricity per year. To see the project’s energy production by year, month and day, Tesla offers a great “Powerguide” website featuring this data.

Although the Town of Needham does not own the solar array (and thus did not have to use any of its own dollars for its construction), the Town does receive substantial financial benefits. The array was built by Brightfields Development LLC and subsequently purchased by Tesla.

The Town leases the land to Tesla and receives from Tesla an annual $100,000 for the value of the physical asset, similar to a property tax, and an annual payment of $50,000 representing the cost of the Town’s maintenance of the project.  The Town pays Tesla a contracted rate for the electricity the array produces. The millions of kilowatt hours of electricity produced by the array go into the electrical grid, and the Town receives net metering credits per kWh generated from Eversource. The contractual payments to Tesla for the electricity are more than made up for by the net metering credits that the Town receives from Eversource, reducing the Town’s annual electric bills by hundreds of thousands of dollars.

The good news is that Town has done very well financially since the inception of the project, in part because of the Town’s foresight in negotiating a favorable guaranteed rate it pays Tesla for the energy the project produces. For 2018-19, the last full contractual year for which there is data, the project produced over 3.8 million kWh of electricity, which is the equivalent of about 27% of the Town’s yearly electrical use.

While the Town paid approximately $348,000 in contractual payments to Tesla for that electricity, Needham also received over $1.1 million in net metering credits, for a net savings of about $775,000.  And, as indicated, the Town received $150,000 on top of that in annual payments from Tesla for the value of the project and for maintenance costs, bringing the Town’s total net benefit to $925,000 in 2018-19.

The two previous years also saw the Town realize large net benefits: approximately $719,000 the previous year and $776,000 the year before that.

Finally, and perhaps most importantly, each kWh of energy produced is renewable energy for which no fossil fuel need be burned.  And that is truly something of which our community can be proud. So, next time that you find yourself at the RTS, look at the solar array in the distance, knowing that it is saving the Town money during tight budgetary times, while its clean, renewable energy reduces the carbon dioxide emissions that would otherwise be generated by the electricity the town uses to light and power its buildings, schools and streets.