In the classic 1967 movie The Graduate, Ben, the main character played by Dustin Hoffman, is chatting at his college graduation party when he is urgently pulled aside by Mr. McGuire, a mid-career family friend. In a hush tone, Mr. McGuire tells Ben:

“I just want to say one word to you. Just one word. Are you listening? Plastics. There’s a great future in plastics. Think about it.”

The movie ends before viewers learn of Ben’s ultimate career choice. Yet, Mc. McGuire could not have been more right. Plastic production has exploded since it commenced in earnest in the early 1950’s. Over time, the manufacture of plastics has outpaced the production of all other man-made materials. According to a well-respected report from the Ellen MacArthur Foundation, global plastics production surged by 20 times over the fifty-year period from 1964 to 2014. It is anticipated to double again by 2034 and almost quadruple by mid-century. 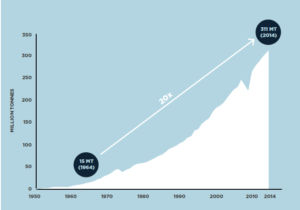 Driving plastic’s incredible growth is its many important qualities. It is inexpensive, versatile, durable, and sturdy. As a result, plastic is now used in countless ways and has become indispensable for many products. For example, approximately 50% of the 787 Dreamliner, Boeing’s most advanced aircraft, is made of plastic. In addition, the expanded use of plastic for packaging, such as flexible packs for food products, help spread its reach across the global economy. As of 2013, packaging accounted for the largest use of plastic at 26% of total volume.

However, due its attributes and many applications, the widespread use of plastic is creating a global problem: massive pollution. A recent study from the OECD determined that twice as much plastic waste is being created globally today than 20 years ago, and only 9% of it is properly recycled. Most of the unrecycled waste is either being incinerated, dumped in a landfill, or discarded into the environment. In the U.S., plastic waste totaled 44 million tons in 2019, equivalent to 295 pounds per person. Additionally, the rate of plastic recycling in the U.S. was 5-6% in 2021. 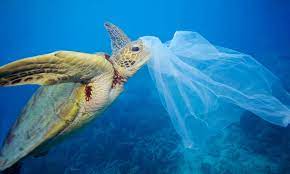 After years of production and minimal levels of recycling, plastic rubbish is building up everywhere, especially in aquatic environments. It is estimated that rivers and oceans are choking on 30 million and 109 million tons plastic waste, respectively. Plastic debris has been found in the European continental shelf and in deep sea canyons off the French Mediterranean coast. If the level of plastic pollution is left unchecked, the weight of plastic waste in the ocean will equal the weight of all fish by 2050.

It is hard to argue with the benefits of plastic to our society. Harder to justify is what our society does with the plastic once it is no longer needed. Green Needham is working to reduce plastic waste in Needham by creating a plastic bag ban bylaw to be voted on at the May 2023 Town Meeting and encouraging shoppers to use reusable bags.

The Problem with Plastics