In the United States today approximately 100 billion single-use plastic bags are used annually, meaning that each American citizen uses over 300 bags a year. This number is staggering when one thinks of the environmental hazards they cause. The effect of plastic bags can be seen throughout Needham with the amount of litter they cause. This is because of their light weight which allows them to easily be blown away and get caught in the environment. Though a single plastic bag from a store around town might not impact the environment too much, when all the bags from these stores monthly are added up, the environmental repercussions become apparent.

The Problem with Plastics

Plastics, unlike other waste, break down to hazardous microplastics (plastics smaller than one millimeter in diameter). The plants that make up the base of the food chain absorb these microplastics from the soil. Then, because plants make up the lowest bracket of the food chain, every creature above them is also introduced to these toxins. Chemicals in the plastics such as nonylphenol and bisphenol can cause endocrine disruption and other malformations within the body. Other potential dangers include impaired brain development, disabilities in learning and behavior, and increased likelihood of contracting breast and prostate cancers. And these dangers are only the ones we are aware of today. 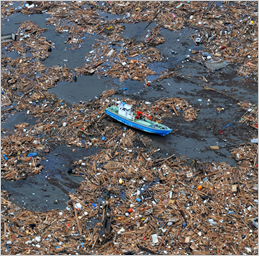 Plastics are even more hazardous in the ocean. According to some estimates there are approximately 50,000 pieces of floating plastic per square ocean mile. These plastics entangle wildlife and poison them once ingested. In the Pacific Ocean, there are numerous congregations of trash created by currents and winds. There is one area, estimated to be the size of Texas, that has been dubbed the The Great Pacific Garbage Patch. Ninety percent of these man made ‘islands’ of trash are made up of plastics, the bulk of which are single-use carryout plastic bags. Plastic bags are the most common item in beach cleanups and the most common trash item seen in oceans.

Plastic bags also pose an economic problem. Waste facilities buy recycling from the town, and the price at which they buy the waste depends on its quality. Plastic bags severely lower the quality because they are a nuisance to the waste facilities. They are a nuisance because they get caught in the conveyor systems at these facilities, requiring production to stop while the bags are pulled out. This drives down the desirability of our recyclables and the possible revenue the town can get with it as well.

How we can Combat the use of Plastic Bags

The enormous hazard of plastic bags can be combated by limiting or even eliminating their usage, one town at a time. Already in Massachusetts there are over thirty communities that have banned their use, including Newton and Brookline and, more recently, Wellesley. So the question is, will Needham be on the cutting edge of ‘going green’ or will we let the towns around us overtake us?

Questions that often arise when planning waste management are: Can one municipality really make a difference? Shouldn’t a more comprehensive solution be the goal?

Often, complex problems need complex solutions; but large scale change is often most easily accomplished when broken down to smaller manageable pieces. To make a difference, Needham should take action now. To be able to reduce our national carbon footprint, it will take smaller actions from cities, towns, and communities first. Isn’t it time for Needham to stand up and help with the global effort to reduce pollution