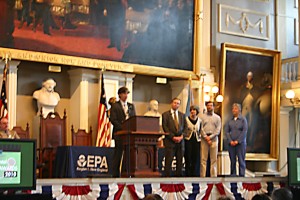 Green Needham is honored to be recognized with a 2010 award for its work to help make Needham a more sustainable community.  The award citation noted that Green Needham has in just three years “dramatically increased public awareness and participation in the need to reduce energy use and carbon dioxide emissions”.  The EPA highlighted the “collaborative” in citing our work with “Needham residents, municipal government, schools, local businesses, churches and civic organizations to promote energy efficiency, energy conservation and clean energy as a way of cutting carbon emissions and saving money”.   Also playing a prominent role was the 2009 debut of the 10% Energy Challenge, with 464 households participating and committing to actions keeping almost 4 million pounds of CO2 out of the atmosphere. 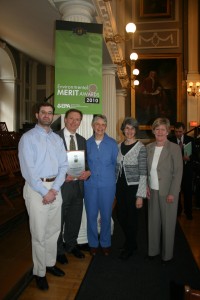 ward comes as Green Needham is preparing to take the 10% Challenge to the next level, with a goal of 1,000 households – about 10% of the homes in Needham – having taken the challenge by the time Needham celebrates its tercentenary in 2011.

Accepting the award were Green Needham Steering Committee members Michael Greis, Eleanor Rosellini, Jim Glickman and Susan McGarvey.  They were joined at the event by EPA staff member and Needham resident Katrina Kipp, who nominated Green Needham for the award.