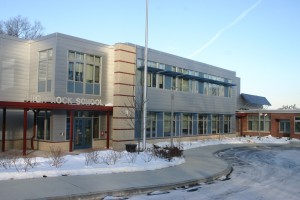 In the summer of 2008, Green Needham and the League of Women Voters Climate Action Committee wrapped up the Needham Community Solar Challenge. Over 250 families and businesses in Needham had made contributions to the New England Wind Fund (supporting wind energy projects all over New England), and Needham earned a 2kW solar panel array for one of its buildings.

The original plan was to install the solar PV array at the Pollard School. But around that time, it became clear the Pollard School needed a new roof. So after some further research, the decision was made to install the PV array at the new High Rock School. High Rock was alredy under construction, and it was hoped to incorporate the panels into the final stages of the project in time for the opening of the school in September, 2009. Construction schedules and building permit issues prevented that from happening in time for the building’s dedication in October 2009, but by January, 2010, the panels were installed. Within a few months, all the electrical interconnections were complete and the solar array began generating electricity. 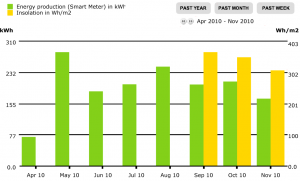 The accompanying chart shows the electricity generated over the first six months the panels have been operating. To be sure, it’s a modest number, but this is only a single 2 kW array.

Here are some back of the envelope numbers to go along with the chart:

Finally, consider this – our site survey showed a potential to install 1 to 1.5 MW of solar PV at the Recycling and Transfer Station . Scale the High Rock numbers up by 500 times and you’ll start seeing some pretty large numbers – of kilowatt hours and dollars.

If you would like to see for yourself how much electricity the High Rock solar array is generating, you can. The data, collected over the Internet, is available online.