Faith communities in Massachusetts are intensifying their efforts to respond to the climate crisis.

Locally, members of First Parish in Needham Unitarian Universalist voted on November 8, with a resounding and unanimous “yes,” to endorse an initiative responding to climate change. The decision to endorse the Unitarian Universalist “Commit2Respond” initiative is a pledge to work to reduce carbon emissions and to promote environmental justice by partnering with vulnerable communities that are hit hardest by climate change.

As a first step, six people from First Parish, joined by five Needhamites from other Houses of Worship, participated in the November 10 Legislative Action Day sponsored by the newly formed MA Interfaith Coalition for Climate Action. With sixteen faith leaders lined up on the Grand Staircase of the State House, over 200 participants heard religious leaders and politicians speak eloquently about the need for climate justice.  We must address climate change “in ways that lift up those who have so long been ignored,” said Minister Mariama White-Hammond, of the Bethel AME Church in Jamaica Plain. After being inspired and energized, participants visited their representatives and senators, advocating legislation that fosters local, renewable energy and benefits for communities that have been disproportionately affected by our dependence on fossil fuel.

The MA Interfaith Coalition for Climate Action was launched in October, 2015, when over 500 people representing 60 religious organizations attended “An Interfaith Gathering for Climate Action.”  The group plans to join the Jobs, Justice, Climate March on Saturday, December 12, 1 p.m .to 3 p.m., the day after the Paris climate talks conclude. The rally will begin at the Parkman Bandstand on Boston Common, followed by a march to Government Center. 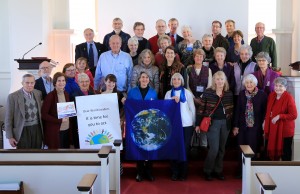 First Parish in Needham, Unitarian Universalist, hosted an interfaith vigil on November 29 to express the hope that the UN Climate Change Conference in Paris will result in an international agreement to keep global warming below 2 degrees Celsius.