It is easy to advocate for more renewable energy and more green jobs. But increasing the Renewable Portfolio Standard (RPS)? Although that may sound complicated and technical, it’s actually a crucial issue which is not hard to understand.

Mass Energy has called increasing the RPS the “most critical” energy issue before the legislature in 2017. Why? Because the Renewable Portfolio Standard (RPS) sets the demand for renewable energy. It requires electricity suppliers, including Eversource and National Grid, to source a certain percentage of their power supply from qualifying renewable resources such as wind, solar, anaerobic digestion, and small hydro, thus encouraging companies to invest in clean energy and the jobs it brings. 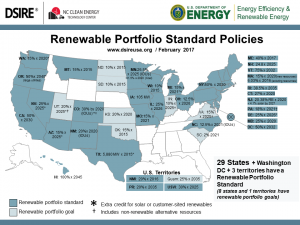 The problem is that this isn’t enough — not enough to meet the goals of the Global Warming Solutions Act, and not enough to help avoid the worst effects of climate change.

Environmental groups across the state, along with business groups like the Northeast Clean Energy Council (NECEC), are supporting legislation that increases the RPS by 2-3% each year, rather than 1%. A May 2017 report (full report PDF) prepared for Mass Energy and the Clean Energy Council showed that an increase in the RPS would lead to the creation of thousands of jobs and lower electricity prices.

An increase of 3% per year would put us at 50% renewables by 2030 and 100% by 2050. Several bills to increase the RPS were heard by the legislature’s Joint Committee on Telecommunications, Utilities, and Energy in a packed hearing room on September 19, 2017.

Continuing public support is crucial. Both Representative Denise Garlick  and Senator Mike Rush  have cosponsored bills to raise the RPS. (Rep. Garlick cosponsored H.2700 and H.2706; Sen. Rush cosponsored S.1846 and S.1876.) Please thank them. (You can use the links above to author a message to them directly.)

To learn more about the Renewable Portfolio Standard, see the information sheet by Mass Power Forward.

Why We Should All Care About the Renewable Portfolio Standard