There’s been a lot in the news recently about Massachusetts setting ambitious goals to reach net zero carbon emissions by 2050. In order for the state to reach those goals, every sector of the economy will have to move towards greener alternatives, and the transportation sector, which accounts for over 27% of the state’s carbon emissions, is a principal target for electrification.

It seems like just a few years ago that we started seeing the first hybrids and electric cars on the road. Now, hybrids are mainstream amongst the buying public, and electric cars are showing up in driveways more and more, driven by the increasing range and more accessible price of vehicles such as Tesla Model 3, Chevrolet Bolt EV, and Nissan Leaf. But amongst mission critical vehicles such as first-responder police vehicles, ambulances, and fire fighting vehicles, the adoption of hybrid and electric vehicles has been slow, principally because there weren’t many options available to meet the demands of those jobs. That is starting to change.

Recently, the Needham Police Department took a green step forward with the purchase of a new hybrid patrol car, a 2020 Ford Police Interceptor Utility Hybrid. The new hybrid patrol car, based upon the mid-size Ford Explorer, has been hit since it was released two years ago, selling thousands to police departments nationwide. 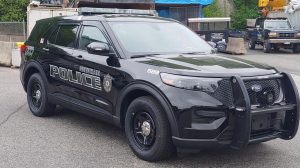 Ford Motor Company estimates that hybrid Interceptor Utility will save departments an average of $3,500 to $5,700 in fuel costs annually versus the non-hybrid Interceptor Utility. The savings come both from the better fuel-efficiency of the hybrid vehicle and the fact that when parked, the engine can be turned off as the battery powers lighting, radios, computers and other electrical equipment. That adds up to approximately 930 fewer gallons of fuel burned each year. Needham Police estimates are closer to 1100 gallons per year based upon historical usage. That’s significant savings to the Needham taxpayer, and just as important, it’s a forecast reduction in carbon dioxide output of roughly 30,000 pounds per vehicle per year.

Cost and environmental impact are not the only reason the NPD chose the hybrid Police Interceptor Utility. The Needham Police depend upon their vehicles to respond quickly to emergencies and pursue suspects, and those vehicles are driven in the worst weather. Officer MacDonald, one of the officers who has had the opportunity to drive the new vehicle, has so far been impressed. “It runs quietly,” he says, “It is wider and has a more roomy comfortable ride. It seems to have more pickup.”

As for performance, it turns out that the hybrid is one of the fastest police SUVs available, capable of accelerating to faster than the vehicle it replaced, and AWD ensures that the vehicle is safe year round, regardless of the weather. Officer Fitzpatrick of the Needham Police has also driven the new vehicle and reports that it handles well.

The Needham Police have ordered three more of the hybrid vehicles, which will replace the gas-only vehicles as they reach the end of their useful life. All of the new hybrid vehicles are expected to be on the road by the end of March. The hybrid vehicles may be tough to spot (keep an eye out for vehicle #589), as they look much like the vehicles they’re replacing, but it’s what’s under the hood that counts.

Lt. Chris Baker of the Needham Police Department is optimistic about the impact the new vehicles will have on the fleet. “The plan is to keep these as front line vehicles for two years instead of the typical one year.  We have four front line vehicles. We purchase an extended warrantee on them for that reason. We are looking forward to seeing some data and results with regard to decreased fuel consumption.”

So, what’s next? How long until we start seeing electric city, police, fire, and EMT vehicles? There are two hurdles that we must get past to see broader electric adoption: a robust charging-infrastructure, and more electric vehicle options that are rated for medium- and heavy-duty and which have sufficient electric range.

The Town of Needham will require more dedicated charging locations to ensure that any electric fleet is always ready. The Governor Baker administration recently announced plans to support a massive buildout of that state’s electric vehicle charging infrastructure over the next decade, which may help the Town achieve this necessary step.

New electric vehicle options will also be coming to market over the next few years, but already some police forces are trying all-electric options. Fremont, California has successfully deployed a Tesla Model S since 2018, and recently added a Tesla Model Y. Bargersville, Indiana and Westport, Connecticut recently began deploying Tesla Model 3s to their fleets. Over the next few years, several manufacturers, including Rivian, Tesla, General Motors, and Ford will be releasing high range all-electric pick-up trucks and SUVs. And, all electric buses and even heavy-duty vehicles are starting to hit the road.

While we may not see pure electric police vehicles in Needham in the near term, it’s exciting to see the new hybrid vehicles on our streets. In the fight against climate change we need all hands on deck. As Lt. Baker says, “We are trying to be green.”

For Needham Police Department, Green is the New Blue